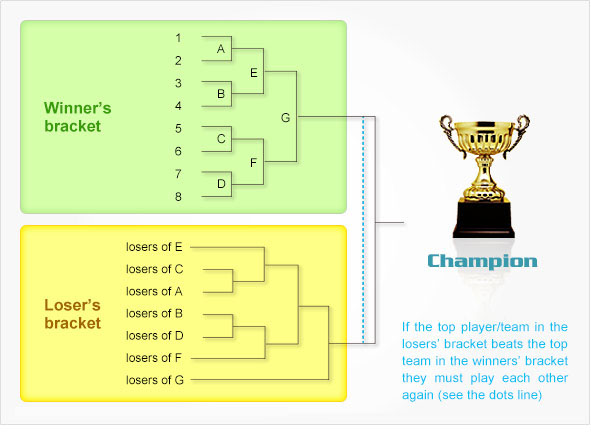 
The double elimination tournament system is suited for use when the number of players/pairs/teams is eight or more. Taking a tournament with eight as an example (please see the diagram above) there will be 14 matches played in the winner’s bracket and losers’ bracket. If the top player/team in the losers’ bracket beats the top team in the winners’ bracket they must play each other again to uphold the basic spirit of the double elimination system-elimination only is lose twice!

The advantages of the double elimination system

This system really can reduce the effect of “bad luck in the draw’ on whether a player wins or loses.

Because the element of luck is controlled, the ability of champion and runner-ups produced by this system is more respected by other players and fans

Also, in a tournament, the situation that sees players meet in the qualifying round and also in the final can be seen, with the players who lost earlier having a chance of revenge, adding an extra talking point to a match.

The disadvantages of the system
Because the players/teams have a “second life” if they lose in a tournament that uses the double elimination system, the number of matches is doubled, requiring more time.

For example, in a tournament with eight teams, if the single elimination system is used only seven matches are needed to produce the winner, whereas 14-15 are need for the double elimination system. Think, if there are 16 or even 32 teams, and also different disciplines and age groups, professional and amateur categories, the tournament would require several days to be completed

This shows that, although the double elimination system is rigorous, it is complex and time-consuming. This is why it is often used in small-medium sized tournaments such as intra-school, local tournaments) while most large tournaments don’t use this system.

The double elimination system reduces the role played by luck, so is more of a faithful refection of player ability, making it a very fair tournament system.

Although it lacks the sudden-death thrill of the single elimination system, it can produce really exciting matches when a player who has lost earlier in the tournament meets the same player later on and manages to extract sweet revenge. This possibility means that the double elimination system is always producing talking points and highlights and matches are as exciting as those played under any other system!

Number of matches calculation formula
The shortcoming of this system can be corrected by using a seeding system.

In accordance with the results of the previous tournament, the more powerful players/teams are seeded (shown in the box below). The players marked with a number are seeded and are put into separate pools to avoid them meeting each other too early.

With the seeding system, if a seeded player is eliminated early it is reasonable to suggest that a dark horse has appeared in the tournament (Unseeded Victor Star Chou Tien-Chen in the red box defeated a seeded player,) making the competition more watchable and giving it more talking points.

※ N is the number of players/teams